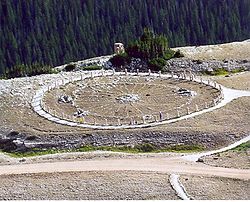 The Medicine Wheel also known by the term of Sacred Hoop can be a literal allusion to the Sacred circle that we hold in life.  The Medicine Wheel started in Native America and was used in traditions to represent the four basic directions, elements and the Animal totems which act as a guardian of each of these corners.  The four animals are:

The Bear – Bears can be good reserves of energy as they take their time.  In accomplishing tasks it is to the Bear we look for the awakening of reserves of strength from within.  Bears adore to take full scope of new heights and physical mounting of trees and achieving new levels from which to look gives us the idea that we should too broach new horizons.  Bears are resourceful and look inside themselves for the solution to a problem.  Honey gives them a sweet outlook on life.  Firerceness comes paw to paw with a bear and its shadow is enough to bring fear to many.  The bear tells us that it is all right and encourages taking a stand and commanding power.  Keen animals in undertaking a path and sensing the right route.

The Buffalo – Abundance, grounding in life and animals who show that initiative can help you get success. Synchronished and honouring self the buffalo is a spiritual symbol and animal in the Native American tribe culture who shows that opportunities should be taken and decisive activity could bring prosperity.

The Eagle is the Spirit guide of the Eastern quadrant.  Messages and understanding of new heights along with diversity are shown in this gallant striking bird.  The inner strength and visionary power in its control and swiping motion are attributes of its total abilities to be both predator and instigator.  The vision and foreshadowing of events to come give the Eagle a link between the Earth and the Sky and in spiritual relation gives this animal or the coming into contact with a potent and positive connection to clairvoyance.

The Mouse is the animal symbol of the Southern Quarter.  The mouse is a dreamer and can be disinterested in real life situations. Inconsistency and confusions can be a mere normality in their life and creatures of the night they often live by more cosy and confined means but in storing and locating homes they can be the best nest builders and family makers.

Symmetry, equal balance and level conscience can all be attained as a result of finding out about the medicine wheel.  It is moreover a process which helps to give introspective thoughts, balance out you focus in life and to give direction where you feel you are lacking or require help.  The Wheel can be used in quiet reflective moment or through meditation to assist you in gaining new and different perspectives.  This can be particularly regarding a hardship or just on your life.

Personal Medicine wheels have been constructed from crystals, seashells, feathers, elements of an individual nature or candles.  It is as you place your chosen objects that you can give thought to the aspect and nature of your main aim which could be financial, relationships, family or community related.

You can draw or colour the wheel in to closely portray your own vision.  If it is to large scale proportion and you can sit inside then you can sit with the spokes and sense the position and energy which can be helped into your frame.

The four elements of the wheel are Air, Water, Fire and Earth.

The four directions are North, East, South and West.

Medicine wheels, or sacred hoops, throughout history were constructed by laying stones in a particular pattern on the ground. Most medicine wheels follow the basic pattern of having a center of stone, and surrounding that is an outer ring of stones with “spokes”, or lines of rocks radiating from the epicenter. Some ancient types of sacred architecture were also built by laying stones or carving on the surface of the ground in particular patterns common to aboriginal people.

Medicine wheels are stone structures and usually constructed by certain indigenous peoples of America for various healing, astronomical, ritual, and teaching purposes. Medicine wheels are still “opened” or inaugurated in Native American spirituality where they are more often referred to as “sacred hoops”, which is the English labelling. There are various native words to describe the ancient forms and types of rock alignments. One teaching involves the description of the four directions and the keepers or spirit protectors of them.

Cultures and continents may vary but the main medicine wheel is the same and its ideology which is to represent the cycle of life and the priorities you may have are vital.

The Royal Alberta Museum (2005) hold that the depiction “medicine wheel” was first applied to the Big Horn medicine wheel in Wyoming, the most southern archaeological wheel still extant. The term “medicine” was not applied because of any healing that was actually associated with the medicine wheel, and shows and denotes that the sacred site and rock graphical position were of central importance and attributed with religious, hallowed, and spirit felt significance, this helped to highlight the important picture a medicine wheel showed and gave proportion to in circles.

In 2007 Indian Country Today wrote an article on Indigenous American hoop dancing and referred to it and the hoop this way:

The hoop is symbolic of “the never-ending cycle of life.” It has no beginning and no end. Tribal healers and holy men have regarded the hoop as sacred and have always used it in their ceremonies. Its significance enhanced the embodiment of healing ceremonies.

One of the prototypical medicine wheels remains within the Bighorn National Forest in Big Horn County, Wyoming.  There is a picture of this representation above.  This 75-foot-diameter had a wheel which has 28 spokes, and there is a vast set of old Native American sites that document 7,000 years of their history in that area.

Medicine wheels are culturally and spiritually as much an ancestral link and basis as the frames for homes and rituals.  They were commonly used by North American natives such as the Ojibwa and also by ancestors of the Assiniboine tribes.

Some locations of medicine wheels are found in the prairie regions of North America, such as Manitoba, Montana, Saskatchewan, Wyoming and Alberta. Larger astronomical interpretations and ceremonial petroforms and Hopewell mound building can also be found in other places of North America.

Medicine wheels were built by laying out stones in a circular pattern that often looked like a wagon wheel. The wheels could be large, reaching up to diameters of 75 feet. Although archaeologists are not definite on the purpose of each medicine wheel, as there are intentions and beliefs with multiple healing, spiritual and religious beliefs, it is thought that they probably had ceremonial significance.

Almost all medicine wheels would have at least two of the three elements which have been mentioned above (the center cairn, the outer ring, and the spokes too), but beyond that there were many variations on this basic lines, and every wheel found has been unique and has had its own style and patterns.

The most common deviation between different wheels are the spokes or the outgoing sticks. There is no set number of spokes for a medicine wheel to have as they are magnifiers of your own questions and charts. The spokes within each wheel are rarely evenly spaced out in distance from one another, or even all the same length. Some medicine wheels will have one particular spoke that’s significantly more prominent than the rest, suggesting something important about the direction it points or the fashion in which it has been shaped.

Another typical difference is the colours used.  An odd variation sometimes found in medicine wheels is the presence of a passageway, or a doorway, an entry in the circles. The outer ring of stones will be broken, and there will be a stone path leading up to the center of the wheel and from where people could be positioned to it.

Also many medicine wheels have various other circles around and about of the outside of the wheel, sometimes attached to spokes or the outer ring can be sometimes just seemingly floating free of the main structure.

They are made by placing rocks or other items down into a circle shape, and four lines or more of rocks are put down across the circle, or near the circle. Medicine wheels are used to mark the geographical directions and events of the sun, moon, stars, and some planets in relation to the Earth and the horizon at that location. These rock sites were also found to be used for important ceremonies, powerful teachings, and as sacred places to give primary thanks to the Creator, or Gitchi Manitou, who is also known as the Great Spirit in the Ojibway language. Other North American indigenous peoples also made these circle offering many scopes of it. Medicine wheels are very similar to circular turtle shaped petroforms with the legs, head, and tail pointing out the directions and aligned with astronomical events and incidents.

The historical and archaeological medicine wheels and sacred hoops have been built for century upon century.  Each one has enough unique characteristics and qualities that archaeologists have encountered significant challenges in concluding with precision what each one was for; similarly, when looking at the precision and love which has been stored in the finds it has been summarised that these wheels were valid depicts of many lives and clans.

The older wheel has been dated to over 4,500 years old and as with Stonehenge in England, it had been built up by successive people who would add new features to the solid mounds. Due to the long existence of such a basic structure, archaeologists assumptive reasoning indicates that the function and meaning of the medicine wheel is one and inclusive of faithful tradition and foreshadowing of evolutions.

Astronomer one John Eddy put forth the theory that some of the wheels had astronomical validity, where spokes on the wheel could be pointing to certain stars, sunrise or sunset, at a certain time of the year, suggesting that wheels as such were a way to mark certain days of the year.

Given the historical, spiritual and phenomenal attention which comes from the medicine wheel it is easy to understand why it holds such mystical allure.  The wheel is primarily a tool which can help you find your exact bearings in your life and then give measure and means to find your own balance.