Indigo and its meaning. 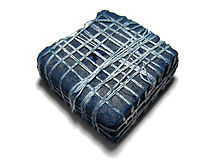 Indigo is a very important spiritual colour.  It is not simply a shade which overlaps with darker blue but in itself presents an aspect of the third eye and spiritualism.

Indigo is probably best known in the natural realm as a colour of the rainbow.  It is the Sixth chakra -Ajna and it represents intuition and gnosis which means spiritual knowlege.  It can be a vital element.  Love wisdom is its wavelength and psychics believe it to portray the third eye.

If seen in an aura it can stand to define in a body an intense religion or element towards spiritualism.  It as a colour means spirit understanding and intuition.  Indigo children are said to be on the Indigo chart.

The Indigo chart denotes emotion and keen senses of a spiritual awarness, which can be of a clairvoyance, clairscentience or clairaudience level.  People with Indigo tones around them usually go on to be a caretaker, computer analysits or councellors.

Picture is taken from online encyclopedia.