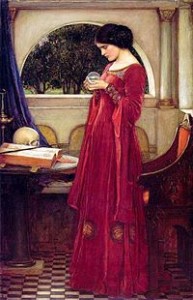 Halloween is approaching and with the spiritual air best suited to entertaining the aspects and building elements of this special time I thought it vital to introduce a few crucial pieces of information surrounding this day of All Hallow’s mayhem.  Scrying the main tool for divination, practicing visual foresight, insight and information collection is a popular means for allowing spiritual hands to help make clear answers.  It is an extension of spiritual demonstration of clairvoyance but is valid in its own platform as a physical tool to showing parts of the future, past and present.  Through history this resource has been instrumental in practicing mediumship, psychic tuning and spiritual modes of message.  Especially at Halloween, this versatile method, takes a solid and founding role in this spiritual celebration.  Although scrying is most commonly done with a crystal ball, it can be moulded to include different types of crystals, many elements of water, stone has been used by ancient tribes along with the effective evokation of fire and smoke.  It may also be performed using any smooth surface, such as a bowl of liquid, a pool, or a crystal cut shape jewel but the significant aim in this action is to procure something with a translucent, reflective or refractive construction.

At Halloween, or Baltane which is known as the festival of those who have passed or the feast or festival there is a widely anticipated and participated cultural code which can include a number of experiences and things you can try which will be aided by this seasonal day and bring breathtaking results.  Scrying is actively used by many cultures and belief systems and is not limited to one traditional origin or ideology. In 2009, Ganzfeld experiments, a sensory deprivation focused experiment inspired by scrying, provided the best known experimental setting for detecting the psi abilities and phenomenal exhibits in the laboratory. Aspects of divination and parapsychology are intriguing, scrying is not only an integral corner stone of Hallowed contemporary periods but was also a relied upon passion of the past.  It was as this spiritual day came into its own that by the light of the moon many would gather and take part in this spirit felt past time.  Believed to highlight the future husband, many girls would be asked to look into a light and image donating surface.  It was said that late into the eve by looking into the reflection the girl would see the face of her future betrothed looking back at her.  Many poised and potent words would also be etched into the covers and shells of natural foods and left to be picked by individuals who would then get a sneek peek at what their futures held.  This peeking or seeing into what fate had in store was a well thought of aspect of the celebrated evening.

Methods and means of your intended spiritual visions of the other realm.

One method of scrying is using a crystal ball and involves a self-induced trance. Trance is an important beginning used when entering into many of these exercises.  Initially, the medium serves as a focus for the attention, and one concentrates solely on the choice of this whilst removing unwanted thoughts from the mind in the same way as a mantra. Once this stage is successful, the scryer begins a free association with the perceived images shown. The technique of deliberately looking for an answer to a query and declaring these initial images aloud.  However trivial or irrelevant information may appear they may seem to the conscious mind as not worthy, but they should all be told.  This is done with the intent of deepening the trance state, in this trance the scryer hears his own disassociated voice affirming take on what is seen within the concentrated state in a kind of feedback loop of it.  This process then culminated in the achievement of a final and desired result. This is in which rich visual images and dramatic stories seem to be projected out within the medium itself, or directly within the mind’s eye of the scryer, this can be something like an inner movie series of pictures. This process reputedly allows the scryer to “see” relevant events or images within the chosen medium itself.

One of the most famous scryers in history lived throughout the 16th century and was known as Nostradamus. He used a bowl of water to then “see” the future in it, while he was in trance.  His prophecies were known throughout the world.

Through Asia and the Far east philosophies have come into lives and given weight to the use of foreseen endeavours.  The cup of Jamshid is one such chalice which supposedly offered a sight to the holder of the seven levels of the Universe.  It is exceptional and especially uncovers the belief that scrying along side crystal watching also known as the vast investigation into horizons to come is a potentially vivid experiment and gives the parties a chance to take an entrancing step on Hallowed hours and all that remains is to say have an exceptional time this Hallowed date.

If you have any spook based, ghoul laced or paranormal experiences to tell from your October 31st festivities then please include them here.