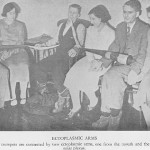 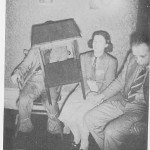 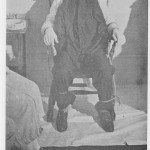 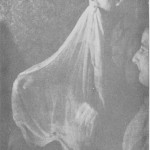 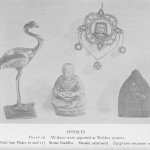 Hey guys, the regular trance and physical circle blog will return next week, but due to bad weather the physical sitting could not take place on Monday 13/02/2012, instead I have been shown via some spiritual means, a rare and gifted individual who not only demonstrates what happens in physical circle but also shows with pictures the progression of sitting.

In this write up I felt I had to include and portray the exceptional gift of Jack Webber.  Most particular of all, this spiritual example, shows the extent to which physical circles are held and how they act.  The mediumistic capability and spiritual connection in him, was at first only stumbled on.  Born to a Welsh family, Jack Webber, had never known about his spiritual capability, instead working down the mines and only hearing of spiritual accounts in rare conversations and being a skeptic not believing there to be any contextual realistic aspect to their stories.  This then, only shows the way in which, as a person his spiritual physical ability and connection to the realm became not only a shock but evidential as something which he had no conceived notion of and defines the fact that spirit can help to shape and show their love in the most active and fulfille d ways.

Jack Webber, was an equisite medium.  It is also his physical circles and the process which links so much with the blogs which are included here.  I hope that you will be able to see how the terms which are used in the blogs are in circles displayed and how physical mediums use the instruments.  The luminous glow, which Jack Webber and many of our spirit friends gift the circles with, are not only perfect examples of evidence of love but also show physically how things can be moved.  The pictures above define several of the specific and prefered physicals which spirit like to move in circle.  The movement of the trumpets, as shown in the pictures, is a good display of the trumpets which are included in circle and are written about in the blog.  This levitation of the physical object is not only a spirit link but a moment where every sitter in circle can join in observing this physical.  I would also like to draw attention to the pictures of Jack Webber’s coat being removed, in stages, by spirit as this clothes tampering is one way which spirit like to show their existance.  Pulling of socks, tugging of sleeves or the twisting of ear rings can and do take place in circles, not only do these events bring a smile to the lips of both spirit and the circle but also show that there is such a range in the events of physical circle.

I believe that Variations of physical activity in circles are good introduction and guidance into the many forms of spirit link which exist.

Physical circles are known to act as a draw for energy.  Physical sittings are both devised as a means for spiritual communication and to show physical ability of spirit.  The restrictions of a physical circle are more obligations, one keeps a set of objects or uses things which are easily touched by spirit.  Here is a list of the objects and the uses, please note that these are also the terms which are used in the blogs.

We have also recently found out that the white mist/ or particle state which has been written about through so many of the blogs is in fact a form of ectoplasm.  This ectoplasm can come in many forms including white.  Black can be a type of this too and when we mention shadows it could be this spirit state which focuses and explains the very dark shadows which takes over the circle all of a sudden and fades out the expressions on faces.  This light state of being helps to form, reducing the light and turning it down in preparation for physical activity.

Trumpet =  these objects which are pictured being used in front of Jack Webber by spirit are the tools from which spirit can lift, or produce sound phenomenon.  The use of the trumpets is multi, as they can be light weight and durable, they can be lifted and also act as an echo through which we can observe spirit voice

Chair phenomenon =  the chairs in the circle are used by spirit to create sense.  Often the chairs are shaken.  In the Jack Webber circle, a down force is felt and is seen to break a chair.  Quite often there are forces felt in circle, like a bang or crack which is known as rapporting, sounds feel as if the walls shake but only vibrate the chair, the chairs in circle are kept the same, yet I attend in my wheelchair, and would like to note that this metal chair which is electric is shaken in and during the circle, spirit also manage to move the rear of the chair up even though it is a heavy electrical chair.

Light /Red light box = In circle a red light is used because the red light is said to be known to help with spirit activity.  The colour spectrum is important in spirit because it is with this chart that each colour has its own aim and attribute quality.  The white light end of the scale is known to help with healing.  How ever, it is the red light end which enhances physical communication.  Back when Jack Webber held circles, the infra red light was used, as a clearer way of taking pictures in the dark.  This insightful invention made it possible for people to see what spirit were doing and what was taking place in the dark.  Jack Webber’s circles were just prior to WWII.  The light we have today to help spirit comes in a red light box.  The wooden surround contains a simple red light bulb.  With a completely dark room devoid of light the red box is heightened and lowered by spirit.  The two native American younger male energies love to tamper with the light box.

Table =  The table in circles is a significant tool through which spirit demonstrate their messages, there are many ways, including table tipping, shaking of the table, levitation of table and of course Jack Webber who was able to gain the tapping out of messages through the table.

Toys =  During Jack Webber’s period of learning, Black Cloud his guide, would ask for instruments and particularly toys.  These toys would be put in and around the circle and played with.  Spirit have also demonstrated this, through, an electric car toy which would have press buttons for sounds, colours and numbers; previously and in the early days spirit would use this toy to sound out Blue, a colour name or number at the begining of each sitting.  More specifically dolls have been used in recent circles and here there is one small doll which seems a particular draw and that spirit have taken a fancy to.  It is this doll which usually moves.

Physical Medium John Boaden (Jack) Webber (1907 – March 9th, 1940) Jack Webber was a Welsh ex-miner, born into a family who did not know much about spiritualism.  It was after, he met his wife, who was born to a family who knew of spiritualism and held circles that Jack was asked to sit and take part.  At first, believing there to be nothing much in it, Jack found the circles boring and tiring.  It was not until in one sitting he decided to play a joke on the members and tap out a personal message on the table that instead spirit turned the table and took the upper hand playing a prank of their own hence a new code came through, and the message which was tapped out on the table by spirit told of where a handbag had been lost.  It was after this that Jack started to take the proceeding of spiritualism more seriously, consequent messages exposed a lost body and predicted events.  Soon, Jack became, an active participant of physical circles.  Lights would often turn and move upside down, cracks and taps would sound as soon as circles were opened, in fact it became an ordeal that at first he was a little apprehensive and frightened of being a part in.  It took a while for the spirit guides and controls to show Jack what physical circles were really made of and to help him loose conscious state and gain the trance mode.

It is from Jack or John Boaden that we learn much of the practices and accepted traits of physical circles today.  Physical sittings are to be revered, to be respected and to be given love.

It is a constant stream of shock and astoundment which is gained from our physical circle.

Harry Edwards who attended circles demonstrated by Jack Webber, also wrote literary accounts and founded his own centre of healing.

What Is Spiritual Healing?

Spiritual Healing is a simple and supportive kind of therapy that helps towards bringing balance to mind/body and soul.  Healing through spirit stimulates the body’s own natural healing ability.  The healer links to healing energy and this is called ‘attunement’, this type of channel is through which the healing energy flows.  Healing can be given to the person/animal who may or may not be present.  It is complementary and treatment is non invasive.  Medical advice can also be received alongside it.

You do not have to be ill, you can receive this as something which will help your sense of who you are and how you feel.

Harry Edwards account on the personal life of Medium John Boaden is called the Mediumship of Jack Webber by Harry Edwards – the great spiritual healer of our time.  Please note that a free and easy electronic version of this whole book with pictures can be gained online.  The link is www.ghostcircle.com/_ebooks.html

Pictures are of Webber’s circle in which, first picture depicts the floating of the trumpet, second picture evidents the levitating table, the third picture is of control removing the medium jacket, fourth picture is of the ectoplasm production and fifth scene is apports.  Pics are taken from online encyclopedia site, with pics and statements about the medium.