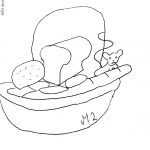 Sammy was sure that he was in the know,

he knew about this saving idea exactly how to go.

Keep it, build it and store it as you do,

that way at least your provisions could see you through.

Provisions were the stored up sum of what someone had saved,

and Sammy was awfully happy about the achievements he had made.

The way that Sammy saw it, he had to make the most of what he had,

and by doing that he was positive that at saving skills he would not be rated bad.

Saving was useful because it meant that you were never left with none,

and even in an emergency out of absolutely everything you would not run.