Each and every time the same, 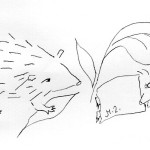 but for poor Henry hoglet it all seemed far too tame.

Sleeping, he had decided was not for him,

he wanted to be out and about, making a bit of a din!

Oh no, but each and every time that same urge came,

instead Henry hoglet was sent to bed, feeling it all such a shame.

Think of all those hours wasted, and those minutes even more,

why waste all that time having a boring old snooze and snore?

Watching grandpa hedgehog having a nap was when the idea struck,

and little Henry hoglet thought enthusiastically that he better follow this up.

There was certainly a difference in grandpa every time he took his nap and then woke,

and Henry hoglet wanted to ask him if all this sleep stuff was a bit of a joke.

Far from unhappy to talk about it, grandpa bestowed his knowledge on all things sleep,

he got himself comfortable and in his memories he did steep.

Grandpa remembered himself as a hoglet running from a snooze or two,

but before he knew it into this slumber habit he became accustomed and then he grew.

Grew healthier, in size and in his appetite for food and life did grow,

grandpa explained he had all of this from sleep to show.

Snoozing had a place in all of the things one had to do,

because simply without it there would be no energy for him to see anything through.

Henry hoglet decided if it had been good enough for grandpa, then he should give it a go,

and sure enough after a snooze of his own then his energy did really flow.