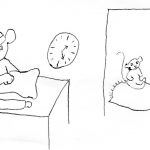 Sammy had heard the word but he did not know what it did mean,

about the meaning though his mum seemed quite keen.

Organise this or that and often would she extremely busy be,

but Sammy had no idea why it relied on time so heavily.

but poor Sammy about the details felt he had not a proper clue.

All matters had meaning and about this to Sammy explain did mum,

a bit of organisation meant that to chaos one did not succumb.

If you did a bit of preparation before the actual time to do what needed to be done,

then avoided could be that last minute mad dash or hectic run.

Sammy considered this at length and tried to find his own methodological way,

of being happy, laid back but organised in his own plans for his day.