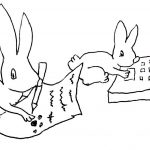 There were slow, fast, short or made to last,

methods of action from today or of the past.

Either or both, a combination could be made,

and to this sentiment the foundations were firmly laid.

Rabbit was keen to use his penmanship skills and write,

he liked to show by this method his creativity might.

Junior was not one for this way of what he thought was old,

instead he was far more on the idea of his screen and keyboard sold.

Quicker, brighter and what he knew as best,

Junior relied on his laptop and did not worry about the rest.

Rabbit though, he felt that letters held more of a personal feel,

neither he nor Junior were able on this subject to deal.

Both had their own advantages and of this they were sure,

hence they decided to shake on it paw to paw.