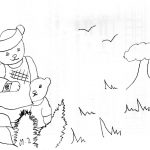 A fitness fanatic was not at all Ted,

he loved lounging about and staying in bed.

Ted was not the sort to get out and go for a walk,

at the very idea of it he did balk!

Stay stationary and keep passive on the activity side,

by these few rules did Ted in his sedentary life reside.

It was not until one day Ted Junior came his way,

and on this matter of health he had his important say.

If Ted did not get out and up his activity score,

then there could be many health issues for him in store.

At school Ted Junior had learnt about staying and keeping fit,

he was determined to teach his dad and help him do his bit.

That is why Ted and Ted Junior started of their health to keep track,

they became aware of what in the exercise stacks they did lack.

and it was with this by his side that he kissed an unhealthy life goodbye.