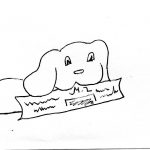 Eager, happy, enthusiastic and waiting by the front door,

puppy was the first one to show what he had in store.

Everything was appealing, excitement surrounded him as he went,

puppy was there waiting and in his mouth the newspaper was bent!

Crashing, thrashing his tail and in the mad rush all was fair game,

puppy felt that in his eagerness, he forgot everything including his own name.

It was hard to keep it all in mind, to this fact puppy had become resigned,

but then came puppy lessons and he found himself for them truly signed.

In time puppy was taught that being eager was all well and good,

Puppy took his cue from some of the best dogs in show,

they were trained, astute and eager but looked like they were in the know.

It was an aim that met achievement and for puppy it meant he could truly be,

involved in doing practically everything well and still oh so eagerly.