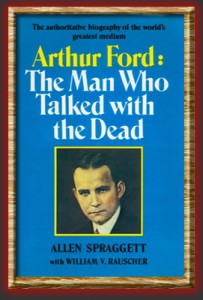 Arthur Ford (January 8, 1896 – January 4, 1971) was an American psychic spiritual medium, a clairaudient, and founder of the Spiritual Frontiers Fellowship (1955).

I would like to address the controversy, concept and spiritual background of Arthur Ford.  He was a pivotal contributor to spiritualism but nor was this in the way you would expect nor was it without speculation.  Arthur Ford was born on January 8, 1896 at 10:30 a.m. local time in the small town of Titusville, Florida; he was to be one to the most enigmatic men of spirit and destined to cast a number of incidents which would shake the public’s pre-conceived thoughts about psychical ideologies.

Arthur Ford claimed that during the First World War while serving in the Army that he did not serve outside the States with his company but then later while serving in France he would hear the names of fellow soldiers who were going to pass of the 1918 Spanish flu. Later he began to hear the names surrounding soldiers who within the next days would appear on the casualty lists. Their names were in exactly the same sequential order on the list as Ford had previously recorded the day before. Ford claimed that sometime before 1932 when he visited the country of India, he had already learned methods of conscious projection from the Hindu religious teacher Swami Paramahansa Yogananda and was constantly in touch with him.  Yet his ability and forethought on states which had not physically taken shape caused much intrigue.  It was discussed if psychic talent was used or spiritual ability, but moreover the nature and accuracy of his gift was highlighted.

After the war Arthur researched purported psychic phenomena and became a Spiritualist around 1921. In 1924 Ford toured the New England States appearing between the acts of the S.S. Henry’s illusion production, and as in the fields of spiritualism due to the aspects of awe and mysticism often the two would come into contact with each other. The Sphinx, a conjuring periodical stated on August 1924 “he gave one of the finest talks on magic ever heard” in Athol, Massachusetts. He lost his interest in fueling the public’s entertainment passion and in magic and became fascinated with the occult. He became a professional at reading sealed messages given to him by members of his audience. This type of mentalism entertainment was very popular in the 1920s. Ford claimed he could read minds.  Though it was not this aspect that formed the basis of his spiritualist work, more that his contacts in spirit were able to give names, information and whereabouts of items only known by them to family members.

Harry Houdini had promised to pass through three chosen words to his wife Bess.  This noted and popular magician who was a master in his field had decided that the one method by which he could prove or distinguish the spirit side was by getting an actual reading of his own choosing to his partner and this he felt could convey if his spirit was still functioning after his passing.  It was after a length of time that in 1929 Ford was able to communicate the same pattern and selected vocabulary to Houdini’s love.  It was with the speech given that it was accepted that Houdini’s spirit had successfully managed to convey his thoughts.

This evidence was primary a source for detailing an aim that Houdini once intended but to show that spirit were able to provide thoughts and consciousness about promises which were made to loved ones.  It is a founding block of spiritualism as many intentions and goals which are fulfilled in circles and through mediums are to attest and to help give correct attributes of a personal regard to the family and friends of passed spirits.

Houdini himself had endevoured to find, investigate and probe into the arenas of spiritualism.  Keen to find and put tests into action to not only discover the truth behind spirit contact but also how it worked and to what extent could it progress.

The Arthur Ford who showed his spiritual knowledge of passed ones, who depicted personalities and gave intricate thoughts from them direct did so with an infinite range of workings.  He used clairaudience, clairvoyance and psychical senses to draw upon energy and helped to put out a picture of spirit levels.

Sir Arthur Conan Doyle, who was a literary figure and pioneer in research was quick to watch A Ford and stated that he was an amazing individual.  His trance medium experience too gained reputation with a control from spirit who could talk to assembled groups and answer queries.  The spirit who take Q and A session were able to start the process and first gave instructed methodology about what it entails in the early years of the seventeenth century.  Though much was not well known about it and the actual recorded spiritual dialogue could more notably be said to have been recorded through the eighteenth century.

Arthur was enabled by spirit, a person who easily came and through the procedure of trances, allowed spirit to converse freely.  The control (spirit person who vocalises) through Mr. Ford could answer people and talk to them about relatives who had passed over, hence the public could learn and engage overtly with spirit.

It was as a result that word spread about Mr. Ford and the topical debates sprung from curiosity.  At the date and precise era spiritual phenomenon was just beginning to circulate and evidence itself.  There was a lot of rumour and more general misinterpretation through printed articles about the man behind the mystical events.

The early stirrings about what was to be a proven, tested and established mode of defining spirit caused a shift in the understanding and emotional responses of a nation.