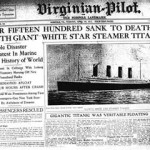 Due to the Bank holiday; the circle blog will recommence following the next session and circle meet, which should be the following Monday.  For this blog I would like to address the vocabulary which can be used when talking about spirit.  There are particular terms which can be used when talking about events or incidents and these can be significant as they help to convey and express the sense and being of spirit.

The recent moment which spirit used when commemorating the anniversary of the ill fated ship Titanic, is one such event, having experienced an incident so seeped in emotive and sad senses.  It is via one such experience that spirit can possibly evidence two of spiritual concepts.  These are imprints and bleed throughs.  In the situation of an imprint, spirit have been involved in an event so sad or traumatic that emotions and feeling are not always able to dissipate.  It is thereby the emotion which leaves a kind of footprint.  It is an emotional link to a scene or environment where people have seen or lived through trauma.  When someone goes or places themselves in that environment which has been shared by an incident or people who have felt something traumatic, then the emotion can be trapped, and hence if feelings are felt in a similar vein then that is by way of an imprint.  Spirit can leave a calling card, a kind of message, by sense and experience.  An imprint is only differed from a bleed through by means of location.  Usually trapped senses which go on to show events are imprints because they remain in the same area or geography linked location.

Some of you may remember, on the eve of the sinking, Titanic had caused an effect to be felt in the most unusual of ways.  It was on this evening that spirit used this moment to show the emotional distress, strain and physical look of what went on that evening.  So many astonishing incidents took place by altering the look and establishing the sense of what was occuring.  It was through this emotional tie, and as a result of this, that a bleed through was caused.  Due to the first emotions which woke up the consequent information and aesthetical incidents spirit were able to portray an account of what went on.  It was the bleed through, the emotional draw and sharing of sense, which accomodated the events which spirit wanted to bring through.  A bleed through, when used by spirit, is simply a way of using emotion and the weaking of the connection which lets a shift of the rare and suspending event to come through.  Thereby, when spirit or a collective group, have experienced an event which is so tied in with emotion or significantly distressing then this can sometimes cause a bleed through to take place, and this emotion can mount.  This emotion can then later be experienced by someone/something else.

It is partly due to the Titanic event, which can be used as an example, that some spirit were able to be helped through to the spirit home.  The next word, I wanted to talk about, rescuing comes into action here.  It is the rescuing which enables a spirit to pass through spirit side.  Rather like a connection or visible haven, spirit can see mediums, whereas sometimes it is difficult to visualise other people or places which are not familiar to them.  It is not uncommon for some people to not realise that they have passed over, therefore this rescuing comes into action.  Especially in the case, when a traumatic incident, has taken place, spirit can be left puzzled.  It is at this time that spirit can find it hard to see beyond what they know.  Who they know becomes important and they want to clasp on to that.  Yet spirit who pass on can be reunited.  It is important, yet unknown to some spirit who have just passed over and are not aware of how to exist.  During these times, spirit do not always see everything, it is of course easier to belong.  This is why some hauntings are established, spirit who do not see spirit from home are befuddled and not able to pass.  However the one bridge can be a rescuer.  A rescue medium will see both spirit and gently guide others who can’t visualise this home.

Spirit side: it is then easy to take souls on.  It is the hardest part when a spirit wants to leave this earth, and that is, occasionally why rescuing occurs.

On the eve of Titanic memorial, many spirits were found to still not have passed, their actions in helping to reinact what had taken place that fateful evening was built up through emotion, surface looks in the room, the blurring of lines and the tilting of the bed.  It was the pure cold and emotion which first gripped.  The later alterations in the physical appearance in the room only served to enhance the experience.  Emotion which carried through was severe and pungent.  The priviledge to be involved, even though it was traumatic, showed that by way of a connected medium, spirit could show events that took place and highlight emotions.  It was due to the bleed through that spirit could be aided to move on.

The two terms of Imprint and Bleed through; these are usually only separated by means of location.  If the experience of shared emotion that spirit want to convey is tied up or trapped to the particular area then that is an imprint; if however it is the emotion and gathered sense which travels through that is more connected to the emotional draw.  They are called bleed throughs.  A rescue or rescue situation is connected to that of spirit who want to pass over but do not know why or if they have died.  Spirit terms of this nature are important because they convert an experience or shared unity.