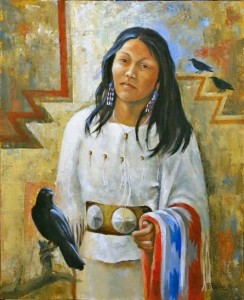 Attended the Northdown physical and trance circle on the 17/08/2011; in this circle everyone took their seats, the curtains were firmly drawn and pegged, the door was ensured closed and the lights were switched off.  It is essential for the red light to be switched on and other lights turned off at the start of the physical setting.  However, on this occasion it is important to note that on entering the room which is set out for circle the overhead light started to flicker in a haphazard and odd way.  Prior to entering the room the light had remained perfect and not shown any signs of flickering.  As the circle started and the members took their seats the light again did seem to dim and flick on and off.  It was considered that this may be the start to the physical occurrences of the evening and after the checks were done, the light was switched off.

On the table in the central part of the room was arranged the two trumpets, upon one was a ring, the crystal ball, and a small toy doll.  Under the table was set out the two larger dolls and these were arranged so that they were facing one another and one had particularly been placed with both arms up.  The windmill toy was also placed outside of the table as was the abacus.  Before the items could all be checked and noted by the sitters, the ring started to roll and fractionally vibrate.

The circle words were read out and the circle commenced.  Only a few minute in and a loud shuddering bang shook the wall behind some of the sitters.  Whispers were also heard in the corner of the room.  Immediately the sitters started to go down into trance, at first light and then particular sitters started to go deeper.  One half of the room felt icy cold and then it was noticed that the mist like air had started to mask some of the room.  It was particularly more noticeable in two areas.  One was in front of a darker corner of the room and one on a wall where one painting seemed to be almost highlighted.  One of the sitters exclaimed that spirit had entered the room and clairvoyant images of Native American figures were viewed by two of the members.  The mist seemed to grow thicker and surrounding the painting on the wall, this was actually a painting of the Native American Blue Feather.

After the Native American figures were seen, physical particulars followed and then the details of a native American lady called Crow woman.  The sitter could see that the lady had crows round her and after giving information about her and the fact that she was a shaman; another of the sitters also exclaimed that she knew of the lady and could confirm that yes she had been a shaman.  – Shaman, is considered almost the medicine person of a tribe or clan.  This could range from the Aboriginal people to the Native American tribes.  Particularly Shamans were well respected and brought specific methods to communicating with the spiritual worlds.  Shamanism is the anthropological term which refers to the shamans and practices.  This lady brought through her physical aspect and also held a black crow close.  After the clairvoyance was seen and confirmed physical taps started to creak across the wall.

One of the sitters then started to speak, the spirit was clear; he wanted to address the circle about how spirit was troubled and worried about the recent problems which seemed to be effecting a lot of people.  It was said that everybody was indeed individual and had special gifts, no two people were the same and even in twins spiritually they were totally separate.  The words spoke of a time in which people felt as if they wanted to break out.  It was said by the spirit that when a person was to go to sleep at this time when they drifted and were between the two veils they were closest to spirit, it was at this time that spirit suggested that spirits could be called upon who have the ability to influence for the healing sent by individuals to be effective as no one bad person does exist it is only the classification of the developed and the undeveloped.  It is the actions of the undeveloped who can cause suffering to those people and it is imperative that healing words are sent by individuals who would ask spirits who have the ability to help.  Never does spirit force their ability but they do respect people and their asking for certain resolving of issues.  The spirit said that there was not one method in spirituality that would or could suit all.  Whilst the spirit acknowledged that certain members of the circle were looking into spiritual books and this was welcomed, it was not necessarily true that everything in that book would suit that individual.  It does not follow suit that every practice is right for that mode of spiritualism.  The spirit was fluid in his words.  The spirit was calm in his understanding and wanted to address how people should feel more comfortable with themselves, knowing that they do not have to be exactly alike in their practices.  Spirit claimed that as long people were this side they do not need to be spiritual at all times but should also live their lives according to the material plane.  As the spirit started speaking the whole room was overtaken with a cloudy white particle like energy and then as he finished speaking a series of pops came from the table beside the circle member.

The following spirit to talk was through the next medium and he addressed the group as friends, he said that the spirit was awaiting the circle presence and happy to know that they had gathered there.  The spirit talked of the vulnerability of the earth and that people did not always now take the time to appreciate or look upon the earth.  Patience was talked of being needed but also an imparting of spiritualism.  Wisdom, love and unity which were felt spirit side were wished to be gifted.  The peace, harmony and love which were spirit side were spoken of and these gifts were also to be imparted on to the earth plane.  The circle was thanked for the opportunity to give these words.

The two trumpets at this point started to glow green and three simultaneous sitters saw the same image come up in the crystal ball.  This was followed by blue lights or orbs starting to show slightly.  The blue lightly came in around the corner of the room and around certain aspects of the sitters.

One of the circle members seemed to have two separate spirits with her.  The light around her was seen to glow by everyone and then her features remarkably disappeared.  At the same time clairvoyant images were seen for particular members.  The same sitter who had the merging features said she felt an energy and then the red light flickered once before she started to speak.  Her words were short but she said she wanted to come in and say how much she enjoyed the sitting.

The green light appeared above the curtain and its shade went from light green to an emerald hue and then a dark green almost black.  This was considered intriguing because of the varying shades of light that were seen.  One of the sitters who was sitting in the corner of the room started to transfigure, in that several members of the group all saw him as being of a much bigger build and shape to what he was.  In this case he took on the appearance of a body builder, which was clearly seen by the members.

Drawing to the end of the sitting the closing words were read.  People started to lift from their trance and the light was attempted to be switched on.  This was the point where one of the sitters despite his efforts could not seem to switch the light back on beyond its flickering and half glow.  The circle leader stated that there was nothing wrong with the light.  The light was again attempted and once more it flickered but refused to actually switch on as if it had been drained.  Using the open door and the hall light the items on the floor were checked and the doll with its two arms now had one arm down and the abacus had a movement in one of its rows where two of the balls had been clearly pushed apart, the light too appeared to have been drained.

After the items and the new physical happenings had been checked, the circle closed and shortly after the circle we were notified that there was indeed nothing wrong with the light as following the circle the light resumed its normal function.  This was intriguing as the light only flickered and behaved oddly when circle was in session.  After the circle the light returned to working.  The crow woman has also been looked into and the lady who was termed Crow woman has a picture of which is shown in this blog.  This fantastic lady was part of a Native American heritage in Canada and in her later years became spiritually aware; she was particularly a bringer of messages through dreams and believed in the importance of the potency of dreams.  Image shown in:  ostyn-newman.com/
Beagle_Painting_35.html/.

It should also be mentioned here that another very special event took place in the circle that night.  Earlier in the same week my Grandma had been reading a book about famous inventors and scientists among which there was a picture of Einstein in his younger days with his wife beside him, remarks were made from members of the family at how beautiful his wife seemed.  The intriguing part was that on starting the circle a clairvoyant image of Albert Einstein appeared in the room who gave a few words to state that he was present at the time that remarks had been made about his wife and how pleasing this was.  Another piece of evidence to show how spirit are aware and in close proximity to others, how the veil is so thin and how the two worlds are close.