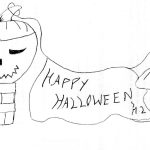 Pumpkins won prizes for being the best,

those roundest, largest and most impressive out of all of the rest.

These pumpkins they sure could grow big and quite round,

poor Sammy in anticipation of the contest was so tightly wound.

Nurture and wish for days had he, over the top of his crop,

his efforts and attempts at care simply did not stop.

On went Sammy in his daily pursuit of the prize,

it was the only way that he felt his pumpkin ambitions would realise.

Finally came the day when the pumpkins were all arranged in a line,

Sammy stood proudly and oh for that pumpkin prize did he pine!

The competition had been mighty and Sammy stood still,

as the judging panel about the pumpkins did amble and mill.

Umming and Ahhing went on for what felt like a lengthy while,

and at last a pumpkin was chosen from the impressive orange pile.

Sammy’s heart all but broke at the thought of his pumpkin coming in at second best,

because he felt in his heart of hearts that his attempt had withstood every test.

Instead he was left to take his second place pumpkin away,

his tears were threatening from his little eyes to stray.

Sadness albeit fleeting in Sammy had surely been felt that day,

he had not known that all his anguish and sorrow was going to be taken away.

It was that Sammy’s mum for the second prize winning pumpkin, she had a plan,

for it was Halloween and the perfect display to which little Sammy ran.

His eyes could not believe how beautiful his pumpkin amongst all the décor did look,

for a moment the ownership of it he even mistook.

The comments and happiness that it brought as people passed their door,

for Sammy all of his pride and belief it did totally restore.