A little fox cub was living like he had not done before, 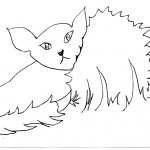 the wilderness was a place with not all that many options in store.

It was hard to live with extremes and trails filled with difficulty,

life had become full of problems and adversity.

It was because of this reason that this one small cub,

had taken to hiding in the prickly, green home of a shrub.

No life was it for a fox used to his own wild wilderness ways,

and saving his environment became the aim of his days.

He could not do it on his own but each action a pledge it did make,

and it told everybody that he was acting for the environment’s sake.

Soon that one little fox became known as the compassionate cub,

he took the lead in gaining attention from many other wilderness shrubs.

Over time animals were called from far and wide,

and everybody was firmly on the environment’s side.

They worked together and they made it a wilderness way,

that sustainability would become the law of the day.