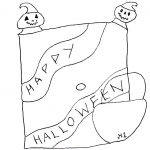 It was oh so near Halloween and scarily apparent it did seem,

Pumpkins symbolic for the protectors of what had been upon the lands laid,