Al had decided that in his job themed play, 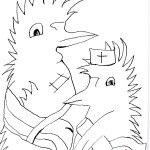 he was a doctor and he was going to have his own medical say.

second came the plasters, injections and then there was even more…

diagnosis after diagnosis saw his mother wrapped from near head to toe,

the plasters kept on coming and where it all would end she did not know!

she asked him a question on illness and about an answer he said he would have to see.

Thoughts about this new problem stopped him from another plaster to apply,

instead he rummaged in his doctor’s toys with a distracted little sigh.

In his aim to find an answer to what he had been asked,

Little Al found that it was actually a very enlightening task.

It was that in Al’s need to look for something new,