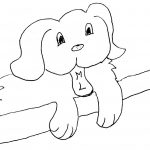 Bobby was abound with energy and things he wanted to do,

everything was a task to him that he simply wanted to see through.

Bobby had always been a good dog but his job was soon to change,

his new owner would require of him help that would test his capability range.

Physically Bobby was to become an assistance dog and a challenge he was set,

a journey saw him learn new skills and with them all his agility was met.

Where his owner needed help, his ears and hands he could be,

but far more than this his companion he was most faithfully.

Bobby, a beautiful dog who trained far beyond anything of him anyone could predict,

every box for helpful and loyal, he had made sure that he had ticked.

It was not long before Bobby was by his new owner’s side,

he was involved in a partnership from which he could help to guide.

Bobby was a dog who took his job most heartfeltly,

it was with his assistance that physically he could set his owner free.