Level One. Swim to Success.

Swimming was a word that had not meant much to them before, 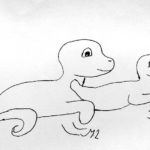 but now about it there was so much more in store.

At first they had felt the fear and held themselves back on dry land,

it was quite difficult to test the water or begin new movements to understand.

In water they could move about freely and learn how to float,

it meant that that they did not have to rely on being transported by boat.

Healthy it was for both the body and the calmness of the mind,

as being in the water for gentle swimming could help one to unwind.