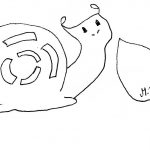 It could be viewed as negative, it could be thought of as sad,

but to Simon the Snail the concept of speed was not all that bad.

He was keen to get about and do things, but this he would do carefully,

it was not in a rush that he attempted anything, instead he did it mindfully.

Snail Slow, was Simon the Snail’s go-to mode of transport and this he knew to be true,

he was not in any mad competition with them, me or even you.

In being slower, Simon could ensure that nothing about him was lost,

everything he took in with heartfelt passion and the meaning was not at great cost.

Instead Simon was snail slow always, and he made no excuse for this philosophy in life,

it was how he succeeded at doing everything, slowly, assuredly and with the least strife.