Life was full of learning and that was for sure, 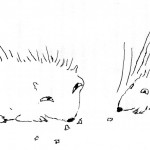 every time Henry thought he had mastered it, there would be more.

Little Henry Hoglet was not one to let time slide,

he never from any sort of challenge did scurry away or hide.

Every part of Henry’s day was used to learn,

and each of his rewards he felt was earned.

It was through work, play and even when at rest,

Henry Hoglet would put his foraging skills to the test.

That was how little Henry Hoglet began in his actions to show,

he was one of the junior hedgehogs who was really in the know.

It was during these nocturnal hours that Henry became the lead,

and he showed all the other little hungry hoglets exactly how to proceed.