It was in learning how to write and read, 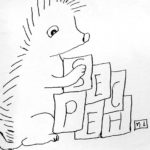 that the opening of any text had become an exciting deed.

At school they had shown Henry Hoglet there were letters in life that he would need,

Fun and useful letters gave a freedom unique to you,

because it was you who could decide what with them you would do.

Henry hoglet thought about being a writer, rapper, teacher or even all three,

because once he had learnt the benefit of letters, there was so much possibility.