Level One. Dressing up or Dessing down.

Level One. Dressing up or Dressing down. 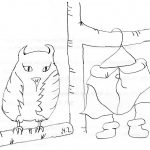 Owl had received an invite to a masked ball,

it had captured his heart and his imagination it did enthral.

How far would he go in the dressing up stakes?

He for sure did not want to make any mistakes.

Dressing up could be elaborate and so much fun,

but he did not want to go OTT and be the only one.

Dressing down was good if he wanted relaxed and a casual ok,

a statement he could make about his chilled out, stylish way.

Decisions, decisions, oh what should Owl do?

About it all, he felt there was such a to-do.

In the end Owl thought that maybe he would do a half and half,

put on would he, his jewel encrusted mask and his colourful scarf.

At least that way he could enter the event happy and still be himself at heart,

his sense of style would be in tact and from his identity he would not have to part.