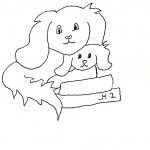 Physical volumes and books, they were there to be seen,

but puppy wondered if they were a bit of a has-been?

People he had seen them holding tablets and phones everywhere,

regularly what they would do was read and stare…

News, stories and even comics were on there too,

there was no need for an actual book to thumb through.

This was what puppy had briefly thought,

before his owner had one of her favourite books bought.

Hours had she spent holding and smiling with that book,

when it was closed it still had that cherished and well-worn look.

Every page did on the same book, his owner’s love it did show,

and it filled puppy with a light but lovely feeling that he did not know.

It was an emotion that brought him happiness and that was for sure,

because on that loved book he had even placed gently his own paw.

He could feel it, see it and even smell it, when taken off the shelf,

it gave a different sense of readership that offered a feeling of wealth.